Lightsabers, Pokemon eggs, Lord of the Rings and Harry Potter – Justin and Lillian had a Big Fat Geek Wedding!

Love in the library

When I sit down and write a wedding ceremony, I want to make sure that it completely reflects the style, personality and interests of the couple. Every word that I write has to be there for a very good reason. With Justin and Lillian, I could have written them five different ceremonies because they had so many interests in common that would translate really well into their wedding. It was the perfect chance to totally geek out!

The setting was the Gallery Room at the State Library of New South Wales in Sydney. The library was the perfect place because as doctors, they both spent a lot a of time studying there. Theirs was only the second wedding ever to take place in that room, as we added THEIR story to the history books. 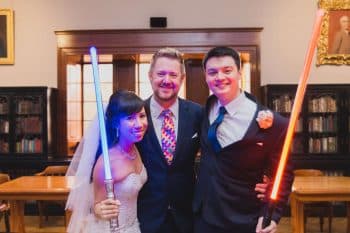 We set the scene from the very start, when Justin and his groomsmen made their entrance to the Throne Room theme from Star Wars. Brandishing their lightsabers, they lined up at the front to massive applause!

Neither Justin or Lillian are strangers to theatrics. They met when they were members of their university revue society. Justin was doing comedy sketches and some dancing, and Lillian was a musical director and dancer.

In fact, Lillian told me the moment that really clinched it for her was when they were dressed up as Aladdin and Princess Jasmine and suddenly Justin produced a rug from nowhere and started singing the Aladdin theme song!

Lord of the Rings

We made the ceremony as inclusive as possible. A friend shared a reading from the third Lord of the Rings book, Return of the King. Wedding rings are usually produced from a box or a bag – their came out of a Pokemon ball. When the rings appeared, we referenced the Lord of the Rings. You could even say that each of them was one ring to rule them all! Their love of Harry Potter made itself known too. In her vows, Lillian said, ” Even though we are both Ravenclaws, I will be the Hermione to your Ron.”

Music was a big part of the ceremony. A group of friends, dubbed the Justillian wedding choir, sang as we signed the register. Lillian had always wanted to sing at her own wedding, so she had arranged and recorded the song herself. It was the first time I’d had a bride singing as part of her ceremony! It wasn’t the only chance to sing either. Two other friends led everyone is a singalong of All You Need Is Love.

Finally, to wrap things up, the bridal party and the groomsmen had a lightsaber each to form a guard of honour as the newly-married couple walked back down the aisle. You could definitely say that the force was with them!

Lillian and Justin were married at NSW State Library, Sydney.