There are always plenty of tears at a wedding – but can you guess the person who usually cries the most?

No need to be embarrassed about being emotional. In fact, I welcome it, because it means I’ve hit the nail on the head and written you an amazing wedding ceremony! And despite the often-uttered words, “Nah mate, I’m not going to cry”, there are two points in the ceremony when a certain someone eats their words (and gets handed a tissue).

Kevin sees his bride for the first time….

After I’ve introduced the bridal party and the music begins, the first thing I do is make sure they’re on their way. Then I turn and watch the groom because the moment he sees his bride for the first time walking towards him is without exception an awesome and overwhelming moment. This is when nerves, excitement, joy and love become a tidal surge of raw emotion that suddenly washes over the groom. Cue the tears!

Here’s the perfect example. When I married Kevin and Julianne at the Royal Botanic Gardens, Kevin just couldn’t hold it in when he saw Julianne. She looked absolutely stunning, and just for a moment that wave washed over him – caught on camera by the wedding photographer – before he regained his composure. And who could blame him? Kleenex anyone?

Rarely does the bride cry buckets. Big girls don’t cry, eh. Not because she has a heart of stone, but because she’s just spent the past 6 hours and plenty of $$$ having her makeup and hair done – and there’s no way she’s going to ruin all that effort! But of course that’s why they invented waterproof mascara and if I’ve learned anything in this job it’s this: dab, don’t wipe.

If you’re wondering, Julianne held it together until the ring went on her finger before she succumbed to a sob. 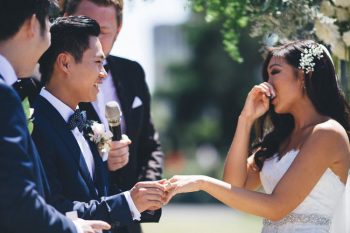 (Don’t be fooled by looking at these photos that these two were anything less than on top of the world! These are tears of happiness and their ceremony was completely joyful and uplifting).

The other moment that the men reach for the man-sized tissues? When they’re saying their vows (or listening to the bride’s). These are words from the heart, chosen with great care, and boy do they pack a punch in the waterworks department. Just between you and me, even I have been known to blink away something in my eye at that point when someone’s come up with something pretty amazing.

Jamy was blubbering brilliant. With a few pauses for breath and a helpful guest running up to him with a hanky, he managed to get through the vows. Then he turned round to see everyone else handing round the tissues because when one person starts, it sets everyone else off too! 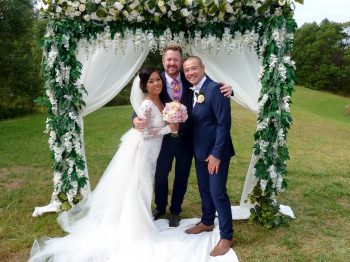 Anita and Jamy at Cabramatta

And when you hear your young son read a poem with words like this:

I defy you not to suddenly find a little bit of grit in your eye. (Well we were outside in a park, right?)

Kevin and Julianne and Anita and Jamy are by no means exceptions. I could tell you about the groom who had tears running down his cheeks and a little bit of snot hanging from his nose all the way through the vows, but I’ll spare his blushes. Yes, I did hand him a tissue and whispered in his ear so that wasn’t caught on the wedding photos, considerate celebrant that I am :)

So grooms – go for it! Open the floodgates, turn on the tap, cry like a baby and howl into your hankies. Because there’s no shame in a few sobs on your wedding day.

Kevin and Julianne were married in the Rose Garden at Sydney’s Royal Botanic Gardens.
Anita and Jamy were married at Bowen Park in Cabramatta.

Many thanks to the wonderful Ann Marie Yuan Photography for her photos of Kevin and Julianne’s wedding. Check out her website!