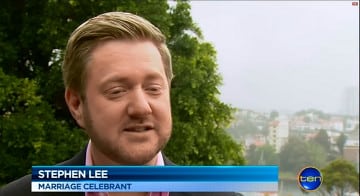 Nothing attracts more noise than a TV camera. As soon as you switch it on, you can guarantee that a car alarm will go off, a plane will fly overhead or a flock of noisy birds will arrive!

So guess what happened when Ten News turned up to interview me about marriage? Someone cranked up the world’s noisiest leaf blower (and yes that is an official fact in the Guiness Book of World Records!)

However we did manage to get a few words down in between some rather energetic gardening going on next door and my interview made it on to Ten News. We were discussing an Australian survey which found that newlyweds often find the first year of marriage to be unexpectedly challenging.

The interview was especially fun to do because it was done by a former colleague of mine at Ten News, so it was more of a catch up than an interview!

You can watch the interview clip (blink and you’ll miss it!) on my video page.