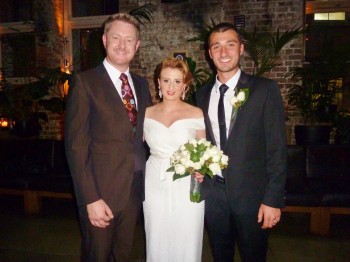 If you work in the construction industry, you know how to be a good builder – and Alex and Vanessa definitely know how to build a happy future together!

Vanessa and Alex got married at the Gin Garden in Sydney. Although their ceremony was a long time in the planning, it felt like only a few weeks ago we’d been sitting in there first discussing their big day. Now we were back for the wedding itself!

What I especially loved about their ceremony was the fact it included so many of their friends and family. They were  groomsmen and bridesmaids, witnesses, and the ring bearer was a close friend too. Both Mum and Dad escorted Vanessa in, which is a great touch. And we had three readings from different people, one appropriately called ‘Scaffolding’ by Seamus Heaney, because Alex is a builder. Everyone had a role, so it was a wonderfully inclusive ceremony. Everyone wanted to take part and show Alex and Vanessa how much they are loved.

Many happy memories from this day – Vanessa looked absolutely stunning as she arrived. As always, I said hello and made sure she was ready before I announced her arrival, and as I walked back into the room and stood next to Alex, I knew he was about to have his breath taken away. And I was right! The look on his face when he saw Vanessa for the first time was priceless.

Both had written vows for each other which spoke directly to each other from their hearts. Vanessa had a little tear on her cheek which was so lovely. And as we closed the ceremony, Alex was bursting with so much pride he looked distinctly red eyed too!

And the building theme continues. Now it’s time to move into their new home they have just had built by Vanessa’s Dad. These two are a perfect couple and I was so proud to marry them. Congratulations to both of you, and happy moving day too!

Alex and Vanessa were married in the Merivale Gin Garden at Establishment, Sydney