Tying the knot – and the Thali 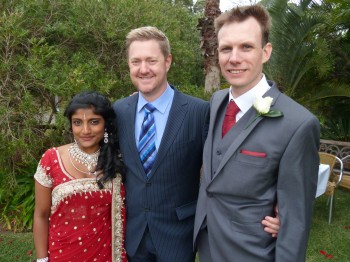 Weddings where the bride and groom come from different cultures are always great to be involved with because the ceremony becomes a very personal fusion and celebration of their backgrounds and beliefs. Stuart and Bramilla’s wedding had lots of those special touches.

I knew as soon I met them that Stuart and Bramilla’s wedding was going to be a memorable one. For me, bringing all the traditional elements seamlessly together from Western and Hindu culture is a challenge, but one that’s also great fun to write. It was important to them both that we included them. For Bramilla, it was paying respect to her family and her upbringing, and for Stuart, it was honouring his bride’s beliefs.

And their ceremony had its own sense of history too. It was held in the gardens of Rockend, the cottage in Gladesville where Australian author Banjo Paterson lived in the 1800s. He wrote Waltzing Matilda, which of course was later set to music and became one of Australia’s most famous songs. 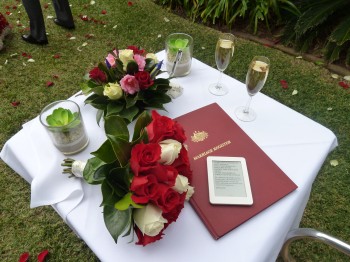 So many memorable moments to recall. Both were emotional as they exchanged the wedding vows they had written for each other, which makes that moment so unique. And the tying of the Thali was a colourful and moving part of the ceremony. It’s a special necklace given in India and Sri Lanka by the groom’s family to the bride, usually in place of a wedding ring, although we did both! As Bramilla sat on a chair, Stuart tied the Thali around her neck to the sound of beating drums, and close family threw red and white rose petals.

And doesn’t Bramilla look beautiful in her sari? Congratulations Mr and Mrs G!

Stuart and Bramilla were married at Banjo Paterson Cottage, Gladesville