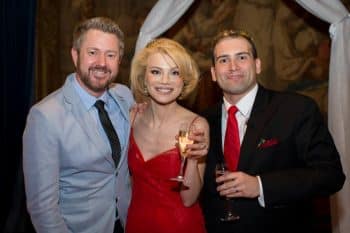 Sometimes when I write a wedding I am thrown a cultural challenge – and Alex and Maria threw everything at me!

One of the things we celebrate at a wedding is how two people, two families and two cultures are joining together. So with Alex being of Russian Jewish descent, and Maria coming from a Greek family – but both also Australian –  I knew this was going to be busy combining cultures!

We packed lots in, starting with a Greek Apple Ceremony (luckily I’d reminded them before we started, and we sent someone down to the 7-11 to buy the apple they’d forgotten to bring!!) In ancient Greece, the apple was sacred to Aphrodite, the goddess of love. To throw an apple at someone was to symbolically declare one’s love; and similarly, to catch it was to symbolically show one’s acceptance of that love.  So throwing an apple to a woman was considered a marriage proposal. When the bride catches the apple she will then take a bite to seal the deal. So Alex threw it over, and Maria took that bite!

We then had a reading – read first in Russian, and then in English, by two friends. And an uncle stepped forward with a traditional Jewish blessing to share called Sheva Brachot, or The Seven Blessings.

And we topped it all off with a crowning ceremony. Crowning is a Greek Orthodox tradition from ancient times. The crowns, or stefana, have their origins in Ancient Greece and have been carried through by the Orthodox Church. Both crowns are worn by the groom and bride in turn, and exchanged three times. They are made from various plants devoted to Aphrodite such as olive branches, vine leaves and lemon blossoms. Asparagus was also used as it was thought to have grown from thorns and hard dirt, so the union of the two will create beauty and fertility. The crowns represent the bond between Maria and Alex, crowned as King and Queen of their household and ordered to rule with justice and integrity.

Symbolism is very important to Alex and Maria, so this was their perfect ceremony. And did I also mention – they wrote some awesome wedding vows for each other too!

Alex and Maria were married in the Great Hall at the University of Sydney.