The same, but different

One thing I find fascinating as a Celebrant is the myriad of tradition, ritual and symbolism surrounding weddings. Everyone is there to declare their love and join in marriage, but everyone does it in a different way. 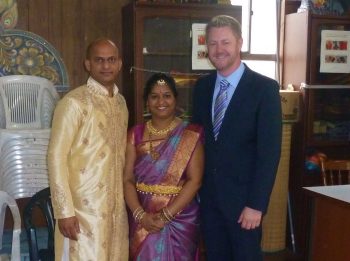 Saturday began with a barefoot wedding in Sydney’s west. Giridhar and Saritha had a very traditional Hindu ceremony at the Sri Karphaga Vinayakar Temple. They are always very colourful ceremonies, full of ancient rituals, and also involving a lot of fruit and flowers! I was there to conduct the legal part of their marriage, and rather than suited and booted, I was suited and barefoot, as is the custom when inside the temple. Giridhar and Saritha were in traditional wedding dress, and looked so smart.

“At an Indian wedding, the bride is dressed up in auspicious colors, and the bridegroom is dressed to exude a regale aura. The best gold jewellery comes out, and the ladies are adorned with henna patterns all over their palms, hands, forearms, legs and feet.  All these dresses and colours symbolise the meaning of marriage and the period that follows it. “ 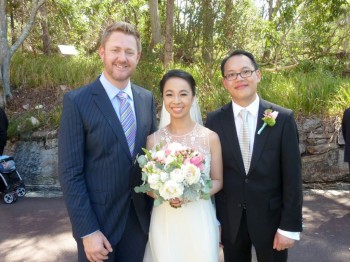 Then it was off to Greycliffe House in Vaucluse, to marry Sarah and Chun. They too had a day of different symbolism. It began in the early morning with a Chinese tea ceremony. The bride is formally introduced to the groom’s family through the tea ceremony. It usually takes place on the wedding day when most of the family members are present. After drinking the tea, the tea ceremony gifts for the bride and groom will be presented on the serving plate. The gifts are usually in the form of red packets or jewellery.

Having seen the photos on Facebook, I was expecting Sarah to arrive for her wedding ceremony in her beautiful embroidered red traditional dress, but she had changed into an equally beautiful white gown. The sun came out as she arrived, and I married her and Chun with Sydney Harbour sparkling in the background. One of Sarah’s bridesmaids, Marion, is also a friend of mine, so I felt even more of a connection to everyone there. 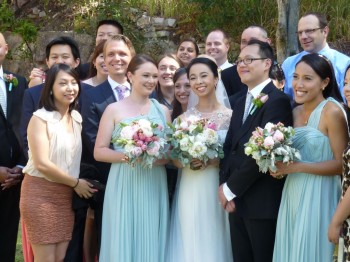 And later, some more Facebook photos popped up, and Sarah had changed into a third dress for her wedding breakfast, with a killer pair of green heels. Whose tradition is that, I wonder? She’s probably making a new one all of her own…..

Giridhar and Saritha were married at the Sri Karphaga Vinayakar Temple in Homebush West.

Sarah and Chun were married in the gardens of  Greycliffe House in Vaucluse.