Elvis in the Chapel of Love – samesame.com.au 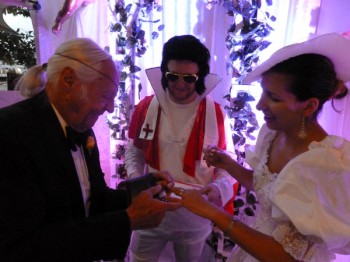 Playing Elvis at the Chapel of Love for a very funny ceremony!

When I was asked if I’d like to dress up as Elvis and almost marry people, I had the wig on before they could finish asking the question! This article on the party for Sydney’s movers and shakers appeared online at samesame.com.au

Support for same-sex marriage was strong at one of Sydney’s biggest and best-known annual parties at the weekend.

The socialites at Social Diary threw their 2012 Christmas Party at Bungalow 8 in Darling Harbour on Friday night, attracting more than a thousand PR professionals, event producers, media, celebrities and friends.

The theme was ‘Wedding Of The Year’ with guests in full dress-up mode – there were drag brides, wedding cakes, topless grooms and mail order spouses.

Addressing guests from the stage, Social Diary’s Director Tiffany Farrington said it was ridiculous that gay couples could not legally marry in Australia and reiterated her support for same-sex marriage.

“Our theme of ‘Wedding of the Year’ was in part a political statement regarding the Australian Government’s backward views on same-sex marriage. The night was a celebration of love, commitment and good old-fashioned revelry.”

Among those at the party were TV’s Kerri-Anne Kennerley, drag diva Marie Claire, and newly-elected Sydney MP Alex Greenwich, who was the guest of honour. He stepped up the mic for a short speech, backing the party organiser’s calls for gay marriage legislation.

One of the most popular events at the party was a Chapel of Love, overseen by Engage Celebrants. Five official Australian Marriage Celebrants, all dressed as Elvis, officiated over Vegas-style ceremonies where couples “almost” married each other. And there was no shortage of same-sex couples eager to say “I Do”.

The emphasis on same-sex couples is significant coming from within such a mainstream event. Stephen Lee of Engage Celebrants said, “We know from all of the couples who come to us, straight and gay, that there is widespread support for same-sex marriage in Australia.”

Farrington later described this year’s annual Social Diary party as the “best ever.”