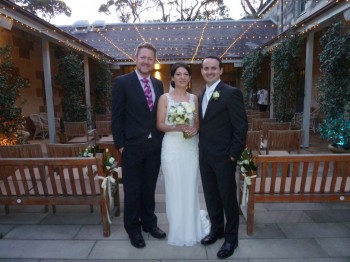 From grandfather to grandson, military history to personal history, Glen and Stephanie’s wedding was a case of following in family footsteps.

Glen and Stephanie chose Gunners Barracks at Mosman for their ceremony. It was designed and constructed in 1873 and formed part of the complex of fortifications at Middle Head designed to protect Sydney from invasion. It’s always a popular place to get married, with its postcard views across the harbour and its wonderful sandstone courtyard. But their choice of venue must have been fate, because it wasn’t until afterwards they discovered a key family link to the building.

Glen’s grandfather, Les, was based there during World War Two, between 1938 and 1941. Les is no longer with us, but we were following in his footsteps and walking exactly the same paths he did 75 years ago. I don’t expect for a moment he’d have guessed his grandson would be standing in the same spot for his wedding day, but I’m sure he’d be very pleased and very proud!

We were all looking at the sky having woken up to heavy rain. But against the odds, and the forecast, the skies cleared just in time and the sun came out for the ceremony. Afterwards, their friend Maryanne told me someone had put a statue of a weather god into the garden and asked for sunshine. Whatever they did – it worked!

I loved this wedding because everyone joined in. It was very relaxed and informal with lots of impromptu laughter, applause, and tears of joy. Everyone was together in the moment. Afterwards Glen’s mum posted on Facebook, “What a perfect wedding yesterday. All the love in the room at Gunners Barracks was obvious as Glen and Stephanie became Mr and Mrs”.

Congratulations Glen and Stephanie – here’s to many more happy years ahead!

Glen and Stephanie were married at Gunners Barracks, Mosman.