‘Gay marriage expected to be boost for wedding business’ – The Age 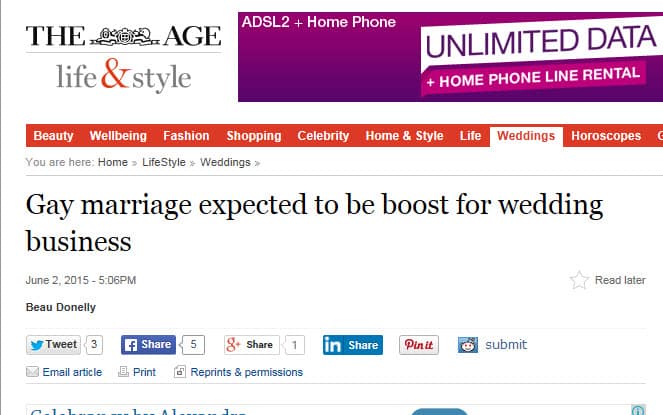 Weddings are big business. And it could get even bigger. Australia’s wedding industry is quietly bracing for a surge in the so-called “pink dollar” in the increasingly likely event that same-sex marriage is legalised. There’s also talk that a burgeoning side industry specialising in gay nuptials may pop up: gay wedding planning, gay venues, gay celebrants.

Some businesses, such as cake shops, have already tapped into the trend and specialise in personalised cakes for same-sex unions. Denise Paras, who runs Nikos Cakes in Oakleigh, recently made a cake for gay clients in the shape of a ball and chain. Cakes for commitment ceremonies were becoming more common, she said, adding that same-sex couples generally spent more than heterosexual couples planning their weddings. “The gay community have been waiting so long to get married so I believe there will be an influx of people wanting to have fabulous weddings and they’ll all need cakes,” she said.

Melbourne celebrant and media personality Greg Evans predicts a rush to the altar if same-sex marriage is legalised, but believes any boost in business will be short lived. “There will be an initial rush, there’s no doubt about that,” he said. “There will be a lot of same sex couples that will want to get married and a lot of ‘I think it’s about time parties’.”

Sydney celebrant Stephen Lee agrees, saying headlines over the past week about marriage equality had gay couples reconsidering their options.

“A lot of people are just waiting for the law to change here,” he said. “I’ve had two inquiries just this morning so I think I’m going to be very busy.”

Mr Lee said a gay couple who were planning their wedding in New Zealand also contacted him to put their plans on hold in the hope they could exchange vows in Australia.