Style and originality make an outstanding wedding – and Amalia and Jake’s ceremony had both in spades!

Both are very creative people in equally creative careers, so I knew their wedding would be a very special one. They picked a small Art Deco cinema which was very evocative of the style they went for and was just the right size to accommodate their friends and family.

We began with a short film about them, while they hid in the projection room, and then they made their entrance together, walking down the aisle between the rows of seats.

Their first date was at the movies, so it was entirely appropriate that they should get married in a cinema. We made their ceremony very much about them, and instead of confetti, everyone was given a box of popcorn to throw as they made their exit! They were the first couple to book a wedding at the cinema in Surry Hills (it’s a fairly recent opening after a big refurbishment) and it was my first wedding at the movies – I got to wear my tux which was an added bonus! 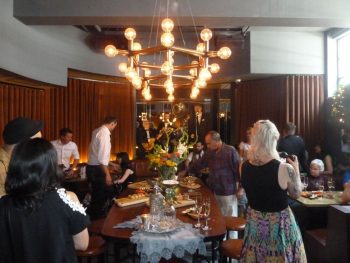 Afterwards guests were entertained in the bar by Greg Poppleton and the Bakerlight Broadcasters  – a wonderful choice which continued the mood.

Overall, the elements they picked and the unique style they went for suited them and their personalities perfectly. And that’s what makes a perfect wedding!

Amalia and Jake were married at the Golden Age Cinema and Bar in Surry Hills, NSW.