Hollie and Gilan say “Aye Do”! 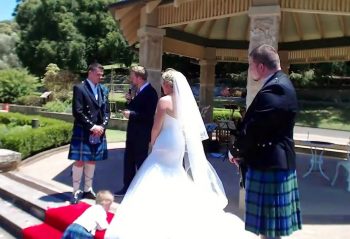 Hollie and Gilan – Aye Do!

There are lots of different traditions and rituals associated with weddings and if there’s one that really suits you, then including it in your ceremony can make a big difference.

One of those is a handfasting ceremony, which has its roots in ancient Celtic tradition. So when Hollie and Gilan came to Sydney from Scotland to get married, they wanted to tie the knot with a special piece of tartan – a strip from the same material used to make his wedding kilt!

We invited one of their family to come up and do the honours as I read a special Celtic poem chosen by Hollie.

It was the perfect choice for their wedding, which was very informal and relaxed with their little boy running around having fun. And that’s the key – anything we can include that chimes with your background or personalities is brilliant.

And we also had some special guests watching back home in Scotland. We set up a live wedding webcast so nobody missed out. Isn’t that what weddings are good at – bringing everyone together? Now we can use technology to do that, wherever guests are!

Hollie and Gilan were married in the Herb Garden at Sydney’s Royal Botanic Gardens.