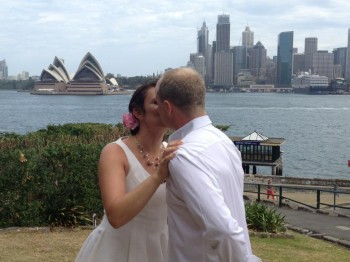 Jo and Jamie seal their marriage with a kiss!

Jo and Jamie’s engagement was so long that their parents had given up asking when they were going to get married – but they never thought it would happen in Sydney!

People get married for all kinds of reasons but for Jo and Jamie, the birth of their second daughter helped them decide that the time had come. They’d been together for years and had never quite found the right reason, or the right time, to organise a wedding. So I was absloutely delighted to marry them by Sydney Harbour Bridge.

It turned out to be the middle of a summer heatwave, which was great news for the guests who flew over from the UK. A new job had brought Jo and Jamie to Australia, and as Jo told me, she never imagined she’d be tying the knot in Sydney. Their story was a delight to share, and the ceremony was a lot of fun. And it even made Channel 9 News that evening, who featured the wedding in a report about how Sydneysiders were coping with the high temperatures.

Afterwards Jo told me, “You understood our personalities and characters perfectly and you were able to match the ceremony accordingly. It’s a day we will never forget!” 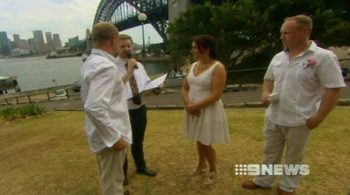 And a funny little twist for me – Jamie’s identical twin brother was best man and they looked so alike I had to make sure I was marrying Jo to the right guy!!

Jo and Jamie were married in Bradfield Park, Milsons Point