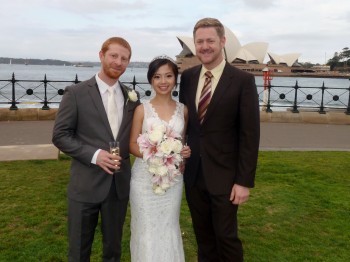 Kitty and Carlisle chose one of Sydney’s most beautiful and iconic backdrops for their wedding ceremony. We had the Opera House, the Bridge and the harbour all in view – but all eyes were on Kitty, who trumped them all when it came to beauty!

I had my fingers crossed all morning for these two. The day before at the rehearsal, it was sunny and hot and I was all ready to pack lots of sun cream in my bag. But on the day itself, we woke up to cloud and drizzle. Luckily the ceremony was in the afternoon, by which time the weather had brightened up a bit. But sometimes unexpected things happen with perfect timing during weddings. At exactly the time that Kitty and Carlisle were saying their vows to each other, a ray of sunshine broke through the clouds and shone down on them. We couldn’t have asked for a nicer touch with better timing!

Kitty looked amazing as she arrived, escorted by her Dad, along a carpet of rose petals. A string quartet played to accompany her entrance, and everyone had their cameras out to capture a very special moment. Both Kitty and her Dad looked so happy, beaming from ear to ear, and Carlisle’s face as he shook hands with Dad and took hold of his bride’s hand said it all. 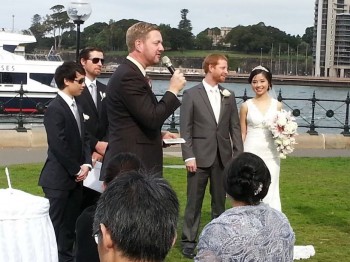 We included a handfasting ceremony during their marriage – which is the origin of the phrase “tying the knot”. Kitty’s Mum had two ribbons, one for Carlisle and one for Kitty, and she tied their hands with a special knot. The ribbons were red, because that’s the traditional colour relating to marriage in Chinese custom, and we wrote some individual words to accompany the tying.

The vows they had written for each other were heartfelt and moving, and the whole wedding had a very happy and relaxed vibe. I really, really enjoyed sharing their story and conducting their ceremony. There were so many smiles! Afterwards several people took time to chat and tell me how enjoyable and personal the ceremony had been – which is exactly what we’d been aiming for.

Many congratulations you two. Thank you so much for asking me to marry you. It was an absolute honour!

Kitty and Carlisle were married at Hickson Road Reserve, The Rocks, Sydney