Life’s a beach for Charles and Janet 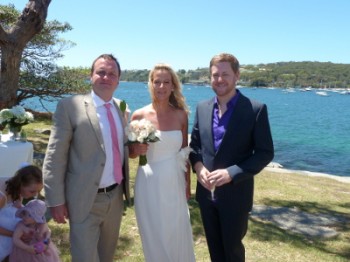 Charles and Janet marry in Balmoral.

What could be more iconic than an Australian beach wedding ? Charles and Janet chose one of Sydney’s best harbour beaches to tie the knot.

Charles and Janet’s was a truly international wedding. The bride and groom themselves came over from England. And with family spread around the world, everyone came together at Balmoral’s Rocky Point to watch them exchange their vows.

The weather was spot on, with glorious sunshine and the harbour sparkling a gorgeous blue. I could see everyone nearby was transfixed as they watched Janet and her bridal party walk across the park and over the bridge to the island because she looked so beautiful in her gorgeous wedding dress.

We chose a shady spot under a tree and I loved sharing their story with their family and friends. It was a ceremony full of love and laughter, and I received the best compliment I could wish for when one of the guests told me afterwards it was the best ceremony she’d ever been to.

Congratulations Mrs and Mrs B!

Charles and Janet were married on Rocky Point in Balmoral, Sydney