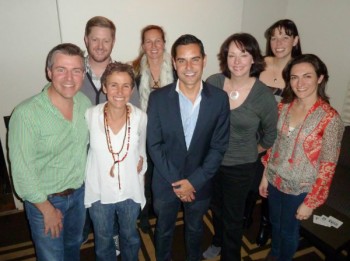 A group of Australian Marriage Celebrants is urging undecided Senators to back equality in the upcoming crucial vote on same-sex marriage.

Engage Celebrants met with Alex Greenwich, the National Convenor of Australian Marriage Equality, in Sydney last night (September 13) who outlined the current position at both state and federal levels. The celebrants reaffirmed their strong support for a change to the Marriage Act 1961 to allow gay couples to wed.

It follows a similar announcement earlier this week from the Australian Federation of Civil Celebrants that its National Committee has ratified a new policy to support gay marriage.

Sarah Cummings, founder of Engage Celebrants, said, “We are fortunate to see the amazing love stories that same sex couples share – just as strong and lasting as the heterosexual couples we marry.”

Four Labor Senators have introduced a bill amending the Marriage Act to allow same-sex couples to marry. It’s expected to be voted on next week, although the result will be on a knife-edge.

Australian Marriage Equality, National Convener, Alex Greenwich said, “The vote will be closer than many people expect, and support will be much higher than it has been when this issue was voted on in the past.”