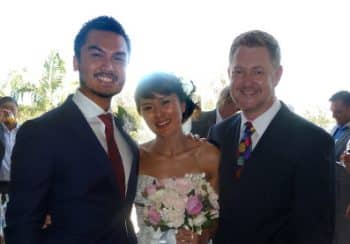 The first time I met Jason and Inyoung, they were wedding guests. This time they were the bride and groom!

Jason and Inyoung are friends of Colin and Sakura, who I married last year. So I was delighted when they called me and asked if I would marry them too. This time though they would be on the other side – the stars of the show, so to speak! And of course it was Colin and Sakura’s turn to be guests.

So when the ceremony got underway, and I could see some familiar faces in the crowd, it was an extra special experience for me because I felt like part of the family! It was a hot, sunny day and the sun sparkled on the water as Jason and Inyoung said their vows to each other. They’d written some really lovely words which really came alive as they read them. They both radiated so much love for each other with huge smiles that I definitely saw a few tears in the crowd! These two are such a perfect couple and I know they are going to be so happy. 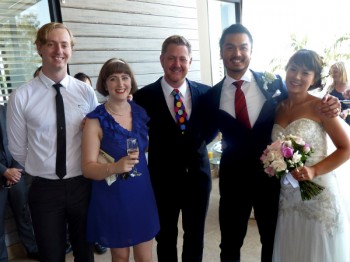 Afterwards it was great to have a proper catch-up with Colin and Sakura, and of course they’re loving married life and have some very exciting plans on the horizon. Often when I say goodbye to my couples after their wedding day it feels rather sad. In the weeks leading up to their ceremony I get to know them really well, so sometimes it feels like losing good friends. But I never forget any of my couples, so when I do get to see them again, it’s always a happy reunion!

Jason and Inyoung were married at Le Montage in Sydney.