On the defensive over the offensive 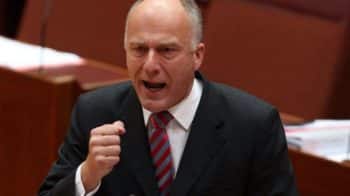 The Marriage Equality debate in Australia is taking a decidedly confrontational turn as arguments from opponents become ever more desperate and ridiculous.

So when I read such comments from the Liberal Senator Eric Abetz, I knew I had to say something. I was tempted to fire off an angry email in his direction, but instead I decided to turn that anger around and say thank you to Warren Entsch and Teresa Gambaro, the two Liberal MPs who are co-sponsoring a cross party Marriage Equality bill.

I’m not one to write to politicians, but I would like to make an exception following your stance on same sex marriage. I would like to tell you how much I greatly applaud your decision to co-sponsor a bill and how much I admire your stance. Going against the loud voices of those in the party who oppose same sex marriage is a tough and brave decision, but change does not come without bravery. You have right on your side, as well as the support of the majority of Australians, and the tide of social progress will sweep through our country, whether the Prime Minister likes it or not.

Please don’t give up or be dissauded. Today I read with immense anger that Eric Abetz thinks marriage equality is a fad, which at best is ill-informed and at worst is deeply insulting. I may not agree with your politics, but I believe you are both political heroes for putting yourselves in the firing line and doing what is right. Thank you.

I know at first hand what an important issue this is. I am a Marriage Celebrant, and the vast majority of couples I marry question without any prompting the requirement for me to say that “marriage, according to the law in Australia, is the union of a man and a woman.”  The same sex couples I perform commitment ceremonies for simply ask for equality in the eyes of the law – despite the fact they are already seen as equal by their friends and family. Their country, however, fails them.

The Marriage Act needs to change to reflect what Australians want. All too often, politicians express their personal feelings on this issue and they seem to forget they are elected not on their views, but to represent the views of their electorate. (I wish the Prime Minister would remember this when he uses language like “I believe that…”. Mr Abbott is not appointed to lead Australia according to his own opinions.)

Please continue to fight on our behalf – you have the political will, influence and power to make an incredible difference to our lives. Your voices will be heard by Tony Abbott. You can help effect real change for our country. Please don’t let us down – we are counting on you.

Again – thank you both.