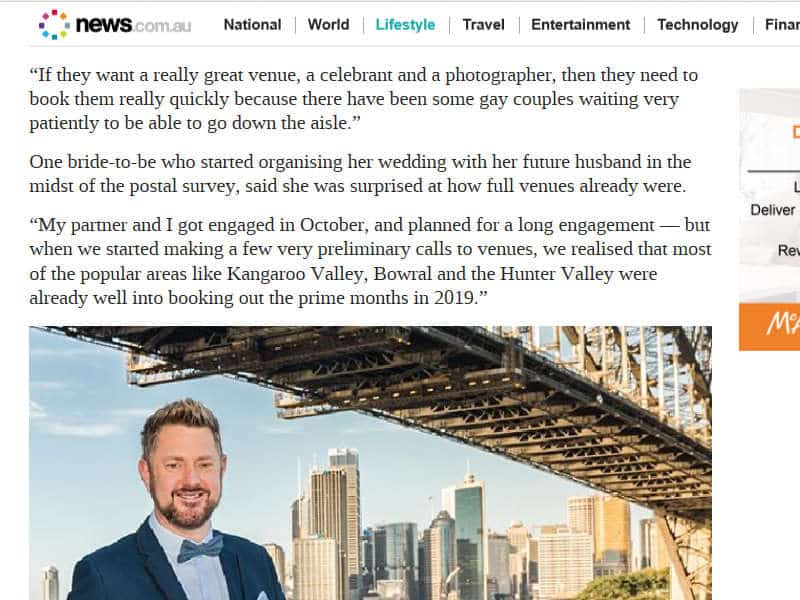 There's a rush for wedding bookings following the same sex marriage law passing - but from straight couples as well! I've been interviewed by news.com.au. Read their report below.

WITH same-sex marriage legal from today, straight couples are now clambering to get married and there’s a good reason why.

One celebrant who spoke to news.com.au said he had seen double the number of enquiries from straight couples compared to this time last year.
Wedding venues have also seen a rise in queries from prospective husbands and wives. The reason? Heterosexuals are desperate to beat the gay wedding rush.

Same-sex marriage became legal in Australia just after 9am on Friday when Governor-General Peter Cosgrove gave the royal seal of approval.
Gay couples can file a Notice of Intended Marriage from Saturday, meaning the first weddings could occur as early as January 9, 2018.
Elizabeth Trevan, a wedding celebrant from Sydney, told news.com.au heterosexual couples were right to be worried given she received her first booking from a gay pair within minutes of the Yes vote being called on November 15.

But, the Yes confirmation seemed to open the floodgates from straight couples as well with calls from prospective husbands and wives ramping up almost immediately.

“There was this flurry over that weekend of all of these straight couples saying they needed to get a celebrant for next year because they’ve just realised that the market is suddenly going to be at a premium and if you want to get married, if it’s simmering away, then you really need to act on it.”
Ms Trevan said she usually received one to two calls each weekend from straight couples, after the Yes vote passed that jumped to six on just Saturday and Sunday.

“If they want a really great venue, a celebrant and a photographer, then they need to book them really quickly because there have been some gay couples waiting very patiently to be able to go down the aisle.”

One bride-to-be who started organising her wedding with her future husband in the midst of the postal survey, said she was surprised at how full venues already were.

“My partner and I got engaged in October, and planned for a long engagement — but when we started making a few very preliminary calls to venues, we realised that most of the popular areas like Kangaroo Valley, Bowral and the Hunter Valley were already well into booking out the prime months in 2019.”

Stephen Lee, a celebrant from Sydney who already has several bookings from gay couples, said their straight equivalents had suddenly realised there was now potentially a whole lot more people looking to book ceremonies.

“There has been a spike in straight wedding enquiries because the penny has dropped that with all the other couples all the venues and celebrants are going to be booked up.”

He estimated he had received double the number of enquiries from heterosexual partners compared to this time last year.

Venues are also reporting an upswing from straight people wanting to get in before the gays.

“We hosted a same-sex civil ceremony on site last year and the level of interest over the last few weeks has been fantastic,” she said.
“In November, we saw an increase of 12 per cent in wedding enquiries compared to [the] same time last year, so this is a promising sign for the industry.”

Ms Dillon said the increase couldn’t solely be put down to gay couples.

“It was due to the buzz about marriage equality that has driven the increase,” she said. “Now that there will be so many more weddings each year, venues will start to get booked out earlier than before which will lead to less availability — they will have to get in quick.”

Sydney venues the Grounds of Alexandria and Watsons Bay’s Dunbar House both said they had seen increased interest but weren’t sure what to put the spike down to.

Vennesza Chaplain, director of sales at the Willows wedding venue in Melbourne, said they had received 100 enquiries from straight people in the last month.

“We’ve had 40 enquires in the last week from straight couples and we’ve definitely seen more since the Yes vote,” she said.

Ms Chaplain said the venue had been very clear that it was happy to host gay ceremonies which may have had the flow on effect of encouraging straight couples to get in touch too, keen not to miss out.

But others have predicted the wedding industry could get a $1 billion boost from the law change with celebrants, florists, venue providers, jewellers and hospitality workers quids in.

A 2015 report from ANZ Bank estimated 38,000 gay couples could be lining up to make honest men and women of each other.

“Based on an average spend per wedding of $51,000, that could add $500 million to $550 million to the economy in 12 months,” the report said.
“If half of the population of same-sex couples chose to marry within one year, the benefits to the economy in the first year of the legislation would be over $1 billion.”

Mr Lee predicted there would now be two waves of gay weddings.

“There will be a peak at first when the law change comes into effect; couples who have been together a long time or those couples who have had big commitment ceremonies with family and friends already,” he said. “They just want to go off and be legally married.”

The second wave, which he estimated will happen in six to 12 months, will be the money-spinning tsunami.

“It’s usually six months to a year in terms of venues being booked out and suppliers being scheduled in,” Mr Lee said.“That’s when you’ll see some serious, serious celebrations.”

Ms Trevan said couples may be encouraged to think outside the box for their celebration.

“I’m hoping for more creativity for weddings away from the standard venues if the regular places are all booked up,” she said.

“My hope is people will now look at places with a special meaning such as favourite restaurants, a favourite park or beach or where they were proposed too.

“Who knows? It’s like that blank canvas that you hope every couple starts with.”