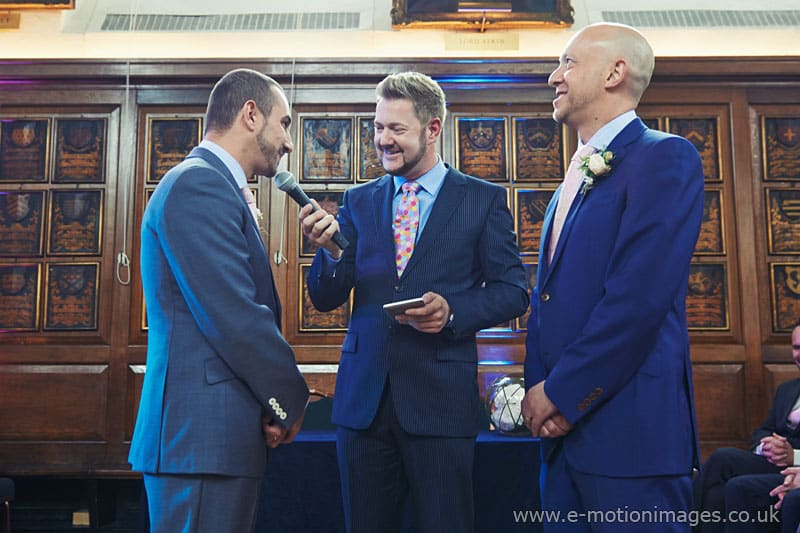 Marriage Equality has arrived in England – and I’m just back from London where I helped to conduct one of the first legal same sex marriage ceremonies.

Over the years I’ve helped many wonderful couples to declare their love for one another in some very special weddings. But this wedding was one of the most special of all – and that’s because I helped one of my oldest and best friends get married. I’ve known Alex since I was a fresh-faced teenager arriving at college and so when he asked me to write his wedding ceremony, I was delighted. What an honour to help such a good friend on such an important day.

Alex and Steven’s marriage was among the first wave of same-sex marriages to take place in England since the law changed just a few months ago. It was held in one of London’s most historic buildings. William Shakespeare had even performed there. But more importantly, it was also a new chapter in their personal history.

So we noted the sense of occasion and history, but we focussed very much on the two grooms. It was a celebration of their lives together and everything they have achieved as a couple. Friends and family flew in from around the world. Steven’s Jewish faith played a big role, and we conducted part of the ceremony under a chuppah. We also included the traditional breaking of the glass (although if I said I was a light globe inside a cloth bag, I might be giving too much away! Apparently, globes break much more easily and cleanly than an actual glass). Friends spoke very movingly of their love for them both. A few tears were shed when the parents gave a speech. And with their love of West End theatre, the music choices raised a few grins!

As I’m only registered for marriages within Australia, a Superintendent Registrar joined us for the legal section of the ceremony. To be part of the day was awesome. I just hope it’s not too long before I can legally marry same sex couples here in Australia. OK, it’s far fewer frequent flier points on my Qantas account, but the other rewards are far greater…..

Alex and Steven were married at the Honourable Society of Gray’s Inn, London.