Tradition With A Twist 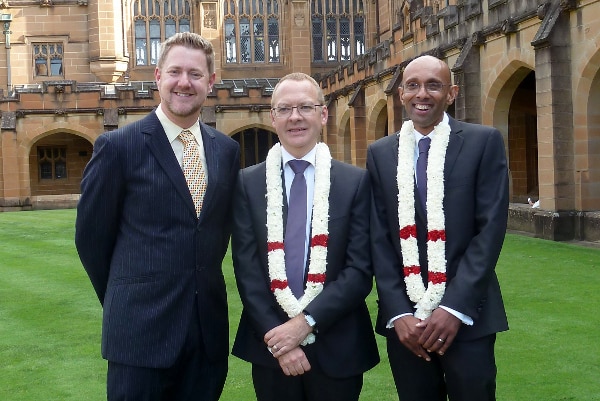 Each ceremony I write is tailored exactly to each couple, whether we throw the rule book out of the window, or take a more traditional path. Brett and Amrit opted for tradition – with a twist.

They’d already been to New Zealand for the legals, and this was a ceremony to celebrate their same sex marriage with family and friends at home in Sydney.

It’s my job as a Celebrant to listen to what you want and create a ceremony that brings it all together. The great thing about the process is that it really can be anything you want it to be. Although religion isn’t normally a part of what I do, there is nothing to stop you including religious elements, and my own personal views are set aside – I’m here to give you what YOU want! As regular churchgoers, Brett and Amrit wanted to reflect their beliefs, but in a very modern context. So they took inspiration from a modern religious text designed for same sex unions.

Various friends and family gave readings, and invited clergy lead prayers and gave them a special blessing. I was able to link it all together with their own story, sharing some of what makes their relationship so special. They wrote their own vows for each other, and I helped them exchange wedding rings – something they had saved from their legal ceremony to share with family and friends. A harpist played hymns they had chosen, some with a Welsh theme to pay homage to Brett’s family background.

The ceremony concluded with the Garlanding – a very important cultural Sri Lankan tradition -again, a nod to two cultures coming together. Finally I presented them with their Marriage Certificate from New Zealand.

As a Marriage Celebrant, I get to see some very impressive venues. This one – MacLaurin Hall at Sydney University – must be one of the grandest to date. But it also held personal significance for Amrit and Brett as both were former students of the university.

Afterwards, they sent me an email which read, “Many thanks for being our celebrant on Saturday. The event went really well – and we thought you may be interested in the comment below from one of the guests….. on the way home, we were discussing the many highlights of the day. Obviously the vows and the exchanging of rings were the highlight (although seen through tears), but also for us the excitement of the celebrant, the best celebrant that I have seen.”

Brett and Amrit’s ceremony was held at MacLaurin Hall at Sydney University.