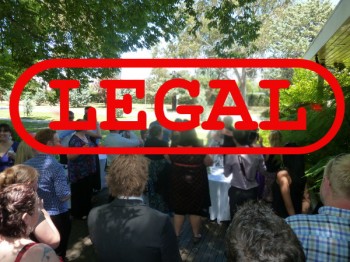 I’ve just had the absolute honour of conducting one of Australia’s very first legal same sex marriages – a moment in history for my country, my couple, and myself. And it was unlike any other ceremony I’ve ever done.

It’s been a long time coming but finally, same sex marriage is legal. With the passing of the law in the ACT, Chris and Neil asked me to marry them. They (like me) are huge supporters of Marriage Equality, and wanted to jump into the window of legality between the law passing and the outcome of the High Court challenge. As I write, we await a final ruling. But, dare I say it, I am quietly confident the law will stand. And then who knows where that will lead? Hopefully to full equality across every state and territory in Australia.

I knew this ceremony was going to be momentous, not least for Chris and Neil, who have been together 13 years. They were planning to marry in New Zealand under its equality law, but hastily changed their plans to marry on home soil. The day was also a personal achievement for me. One of the main reasons I wanted to become a Marriage Celebrant was to be able to marry same sex couples. And within hours of the law changing, I was doing just that. 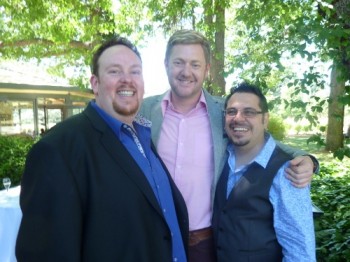 Their ceremony was a true celebration, with a party vibe. It had a palpable air of energy, excitement and expectancy that I had never felt in quite the same way before. It was like a pressure cooker of love and joy which had been building up for years, about to explode. As I introduced myself, and said I was “a Marriage Equality Celebrant appointed by the ACT Government”, there was a HUGE spontaneous cheer and a massive round of applause which took me quite by surprise! It was like a rock star welcome. And I can’t tell you how happy I was that I was able to say those words.

There were tears of joy, tears of laughter, lots of champagne, some beautiful marriage vows and when I declared them to be legally married, I was almost deafened with the cheering. I left on a high with my ears ringing and my heart bursting, Here’s to many more!

Chris and Neil were married at The Lobby in Canberra.