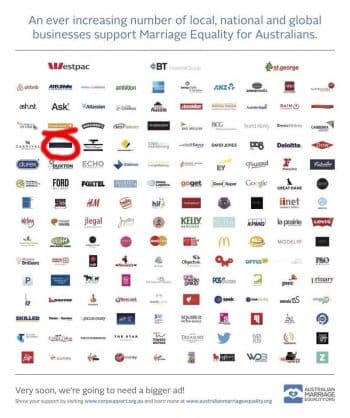 I’m very proud to be part of the latest media campaign from Australian Marriage Equality published in The Australian newspaper.

The only Marriage Celebrant on the list, my logo sits alongside some of the best known companies and brands in Australia (and in some cases around the world too).

It’s the second time this campaign has run and there’s been a three-fold increase in the number of supporters. Australian Marriage Equality says it’s going to need a bigger ad!

In a week when we’ve seen a lot of negativity surrounding Marriage Equality, it’s good to show something positive. The campaign has taken a nasty turn in the past few days, which I think is a sign in itself that those who are so vocal against the issue are becoming increasingly desperate as they realise they can’t turn back the tide.

I remain hopeful that we’ll achieve equality by the end of this year. This isn’t something that will go away and I believe the Government realises this will become toxic for them if they continue to ignore the calls for change.