The Calm Before The Marriage Equality Storm 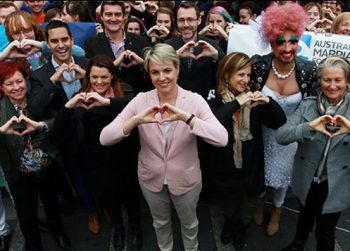 Gentlemen, start your engines! After several false starts, it definitely feels like we’re on the starting grid for Marriage Equality – and there are plenty of people revving their engines ready for the green light.

Those of us in the wedding industry are preparing ourselves for an avalanche. We’ve been here before but this time it feels different – now it feels tangibly real. So in the final calm before the storm, everyone is making sure they are ready.

I’ve helped many same sex couples to celebrate their love. I even conducted one of the first legal same sex marriages in Canberra when the ACT introduced their own equality laws – which lasted four days before the High Court declared them all void. I never forget any of the marriages I have solemnised, gay and straight, but Luke and Victor’s wedding was like nothing else I’d ever experienced. The feelings of excitement, relief and pure joy exploded when I introduced myself as a legally authorised Marriage Equality Celebrant. When the Marriage Act 1961 changes for everyone, I can’t begin to imagine how truly amazing all those ceremonies will be.

I’m always heartened when couples I am marrying ask me (without any prompting) that they’d like a paragraph about Marriage Equality in their ceremony. As a Commonwealth Marriage Celebrant, part of the legal requirement in the ceremony is for me to tell everyone that “Marriage, according to the law in Australia, is the union of a man and a woman.” At one recent wedding, guests actually booed when I got to that part. The vast majority of my clients ask me to make it clear to everyone present that they simply don’t agree with those words and look forward to the day when everyone is able to marry.

The time will soon be here when all of that is just a memory. Even so, there are some couples who are fed up waiting. As I write, John and Chris are heading to New Zealand for their legal marriage, and next weekend they are throwing a massive party and having a second ceremony with me, in front of all their family and friends. Others are hastily changing plans – a lesbian couple who were going to do the same thing as John and Chris in February are now putting it on hold in the hope we can do the legal ceremony in Sydney. And I’m looking forward to reconnecting with all the couples I have created commitment ceremonies for so I can finally make them all legal.

Marriage Equality is so close, we can almost touch it. If all goes to plan, I could be officiating legal ceremonies by Christmas. What a wonderful present to unwrap.