The river of romance 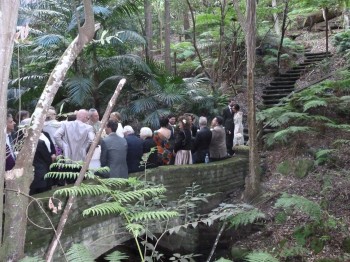 If you’re getting married on Moon Bridge, there’s only one song you can walk up the aisle to. Moon River of course!

It’s hard to find a unique spot for your wedding but Moneera and Tim pulled that off with style. They chose a stone bridge over a meandering stream, tucked away along a bush walk in Sydney’s Cooper Park. It was the first time a ceremony had been held there and it worked brilliantly, with the bridal party and groomsmen standing either side of a stairway leading up from the bridge, and Tim and Mon at the bottom. It gave the whole ceremony a great sense of theatre and occasion.

Tim and Mon are a couple destined to be together. They were born in the same hospital, in the same month of the same year, they went to the same school and they have the same friends. So as Moneera walked up to the bridge to that special song, sung live by a friend, it was a very natural progression of their friendship. 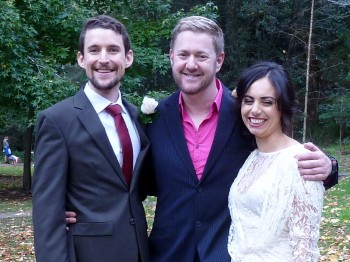 A close long-term friend shared some wonderful words about the bride and groom. The vows they’d written for each other were both reflective of their personalities, and they received an impromptu round of applause from family and friends as they said them. Moneera dropped a rose from her bouquet into the stream to remember her father, and her mum rounded things off with some moving words.

And as for the date? Well – May the 4th be with them as they head into married life!

Tim and Moneera were married in Cooper Park, Woollahra