Forget anti-ageing creams, botox injections and facelifts. The real secret to feeling young may be staring you right in the face!

There’s nothing like falling in love all over again to put a spring in your step and a smile on your face. I’ve had a few weddings recently which prove that getting married isn’t just for the young; it’s also for the young at heart. Couples often find themselves falling in love unexpectedly later in life, or despite swearing they’d never walk down the aisle again.
If you look at the most recent Australian marriage data, the average age for couples to marry is 28 for women and 29 for men. That’s actually slightly younger than in previous years.

Happily bucking the trend was my first wedding of 2017 - Pete and Fi at Avalon Beach Surf Lifesaving Club. I’m sure Pete won’t mind me mentioning he’s in his early 70s, not that you’d know it – I actually had to double check his passport for his date of birth! He had a great attitude to finding love again. He told me, “Fi and I have an amazing life together, and to be in that situation at 73, I think I'm very lucky to have met this Kiwi girl.” And Fi agreed wholeheartedly. She said, “He’s like Peter Pan! Full of life, incredible energy, fantastic sense of humour. And we both love life.”

Also at their wedding were their friends Bill and Joy, who are in the 90s. They got together after a chance meeting in a car park 5 years ago. When I mentioned this at the wedding, everyone gave them a big cheer! Bill got up from his seat with the biggest smile on his face, and said to me, “It’s second time around for us too.” Brilliant! What an inspiration to us all. 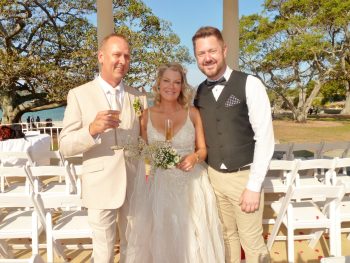 Which brings me to Tina and Len, who I married at Balmoral Beach last month. What an amazing couple…. they spoke so tenderly and lovingly about each other that it was like chatting to lovestruck teenagers!

After meeting at a party, they had great fun spending time at the beach, playing pool and getting to know each other better.

In Len's words, "Tina asked me if I wanted to go on a journey, and that was all part of that journey. She never ceases to amaze me."

And Tina said it made her feel like a kid again. "All of a sudden I had this new lease of fun and which made me feel like I was 20 years old.” 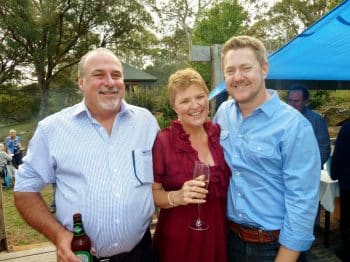 These days, there (usually) isn’t heavy pressure to get married, and for those who've been married before, it's sometimes a case of once bitten, twice shy.

So to answer that, let me give the last words to Robert, who I married to Judith at their country property outside Sydney in a very relaxed ceremony/barbecue/party.  It wasn’t his first time; in fact Judith jokingly called him a serial groom! But kudos to him for never giving up.

When I asked Robert to describe Judith, he put it very simply – “She’s the find of my life. She is the most precious thing in my life. I don’t know about the mugs who were on RSVP before me, but they never had their eyes open!”