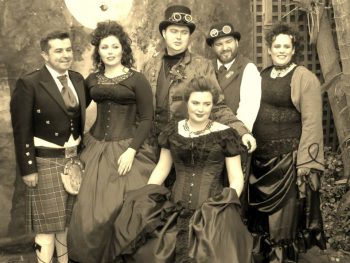 I love unique weddings and so when Jon and Nou asked if I’d mind joining in their Steampunk wedding, I was on board immediately!

So here’s a small confession – I had to Google what Steampunk actually means. Wikipedia says: “Steampunk refers to a subgenre of science fiction and sometimes fantasy that incorporates technology and aesthetic designs inspired by 19th-century industrial steam-powered machinery.” So With that in mind, it was off to the dress up shop for a top hat and goggles!

Jon and Nou had put so much careful thought into their wedding so I knew I had to pull out all the stops with the ceremony. It was a small and intimate wedding among the ferms in their back garden, with just their closest family and friends there. Having just moved in, it was a chance to make the first of many happy memories in their new surroundings, and getting married at home always adds a very special level of intimacy.

When I arrived, the house had bene transformed – gone were the packing boxes from when I’d first visited – replaced by a series of round tables for dinner. It was a real joint effort – family and friends had worked hard to decorate them meticulously. Outside in the garden, their new neighbour had lent them a hand painted mural to hang on the fence, and there was a beautiful arch decorated with flowers tied into their colour theme. 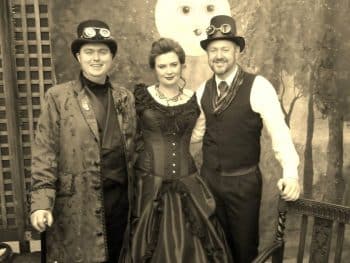 And everyone had really thrown themselves into the Steampunk theme with gusto. It was like stepping back into Victorian times. Even their photographer had brought along a vintage camera.

In the ceremony, we talked about the many reasons they had fallen in love, pulling out quotes from their favourite authors Philip Pullman and Terry Pratchett, with contributions from those closest to them. The vows they wrote for each other were eloquent and touching and really summed up their love for each other. And there were a few tears all round too.

In short – as is most appropriate with the Steampunk theme – everything went like clockwork!