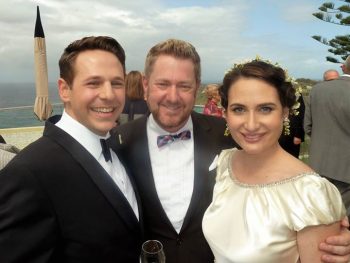 Richard told me that Brionny is “easily castable as Hollywood A list.” So you may not be surprised to hear whose famous footsteps they followed in for their wedding!

One of the many things that bonded these two was their love of theatre. So they picked the perfect spot to get married. If you check out Jonah’s website, it tells you how it’s hosted the likes of  Laurence Olivier, Vivien Leigh, Sir Anthony Hopkins, Joan Collins, Rachel Griffiths,  Sir Michael Caine, and Kevin Spacey.

But the two big stars of this show were Brionny and Richard. Their vows were a perfect performance, with the dialogue crafted lovingly and coupled with the emotion of some of the greatest movies ever made. And with the backdrop of the Pacific Ocean from Jonah’s terrace with its views up and down the coast, you could easily say this was picture perfect.

Afterwards, Richard put the best of critics in the shade with a wonderful review:

“My wife and I had the privilege of having Stephen marry us in September this year. From the moment we first contacted him right up to the ceremony, he was enthusiastic, professional, and available. Every option was made available to us in creating a ceremony, with a wealth of fantastic options and suggestions provided in an elegant folder. Stephen also did considerable research, interviewing us and our close friends to get a full view of who we are as a couple and integrate it into the day. Stephen presented extremely well and conducted our ceremony beautifully, and many of our friends and family commented afterwards on how well everything went. I would heartily recommend Stephen to anyone!”

Richard and Brionny were married at Jonah’s, Whale Beach, NSW.