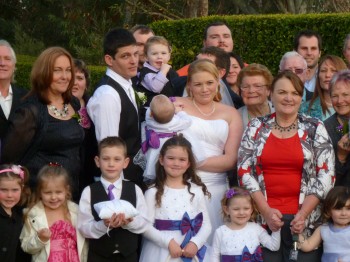 James and Martha – and their family!

Family is all-important for James and Martha so it was no surprise their wedding was a big family affair!

Weddings aren’t just about two people joining together, they’re also about two families joining together too. In our meetings leading up to their wedding, it was clear from James and Martha that their family was the number one thing in their lives. With five children, their home was buzzing with activity!

Everyone had a special role on the big day at Eden Gardens. Brothers were groomsmen, daughters were bridesmaids and their son was the ring bearer. Their marriage put the official seal on things for them, James becoming a husband as well as a father. Martha’s vows brought a tear to everyone’s eyes, including her own, with some heartfelt words that summed up exactly how she felt. And James, a man not used to the spotlight, stepped up superbly with his own personal vows too.

We incorporated a moving unity candle ceremony into the afternoon (I was worried the wind would blow them out but phew, they stayed alight!!). Each candle was wrapped in a purple ribbon to match the theme of the wedding, and their names and the date were beautifully written on the candles. Next time they light them at home it will bring back some great memories!

My favourite memory of this wedding is standing in the background watching the photos being taken – the smiles and laughter from everyone said it all. Congratulations Mr and Mrs G!

James and Martha were married at Eden Gardens, Ryde