Who wears the pants?

Who wears the pants in a relationship? Komi and David decided to settle that score at the end of their ceremony with a game! 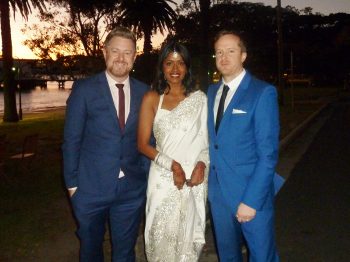 Blending wedding traditions into a modern wedding ceremony is always fun and it was the perfect thing to do for Komi and David. It was definitely a colourful ceremony as we gathered under the fig tree outside Dunbar House in Watsons Bay. Many of the guests were in full bling!

To honour Komi’s culture, they exchanged flower garlands three times. Then we played the ring game, which is a South Indian wedding tradition. A ring and a shell are dropped in the bowl and the newlyweds are asked to find the ring. Whoever gets the ring first is declared as the winner and will wear the pants in the relationship. So the stakes are high! As Komi and David are both competitive, things got messy!

David won the best of three. But something tells me that victory may be short-lived! I think the wearing of the pants will absolutely be a shared responsibility :)

Komi and David were married at Dunbar House in Watsons Bay.